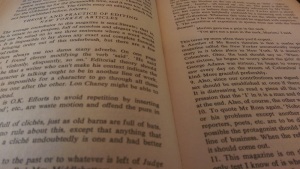 Fans of James Thurber will hopefully be well familiar with his memoir about his time spent at the New Yorker, working with its founding editor, Harold Ross. ‘The Years With Ross‘ was first published in 1958 and is still in print.

Flipping back through an old (1959) copy of the Penguin paperback edition the other day, I landed on Thurber’s long extract from a memo by New Yorker copy editor Wolcott Gibbs, in which Gibbs shares with Ross some of his rules for editing the magazine’s fiction writers. (Journonerds will probably best know Gibbs for his famous ‘Backward ran sentences until reeled the mind‘ parody of Time magazine’s ‘Timespeak’.)

Although the memo was first written in the 1930s, twenty years before Thurber quoted from it, I was struck by how many of Gibbs’ principles are applicable to most of today’s bloggers who dabble in long-form, including those of us who work at Pando. I’ve quoted the relevant ones below, including Thurber’s introduction.

"NEVER CONFUSE THE PLATFORM WITH THE CONTENT."
— George Brock

“Time is a great teacher, but unfortunately it kills all its pupils.” — Hector Berlioz